This Saturday, the 3rd of October, Joondalup City FC First Team take on League winners, Carramar Shamrock Rovers FC at Iluka Sports Complex. The day will be filled with fixtures as our State 18' kick-off at 11 AM, followed by the Reserves at 1 PM and then the Firsts at 3 PM. 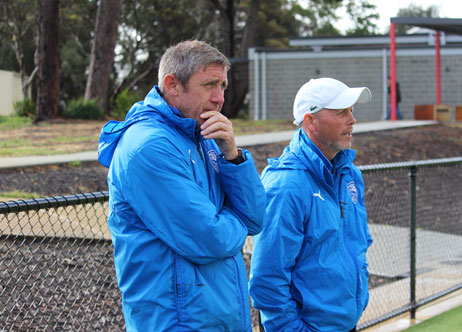 All 3 points are vital for Nigel Smiths' men to snatch any chance at a finals place. Also, with the vital 3 points, they also need results around the grounds to fall in their favour.

The previous meeting between the sides finished in a 1-1 draw in Carramar with plenty of opportunity for winners from both sides, so Saturday's fixture is set to bring some entertainment.

JCFC First Team Head Coach, Nigel Smith wants to focus on the football and the positives so far. "I'm just looking for us to play the best we can and finish off the season on a high. If we get it right, I can see us going on and winning the game." Smith goes on to say that what happens around them they can't control. "If we squeeze into the top 3, we squeeze into the top 3 but a win will see us hopefully finish top 4 which was our goal from the outset."

Terry Maton, JCFC First Team Assistant Coach gives his views on the season conclusion. "There was a period of time during the season where we were very dominant, but I think in the last couple of weeks the standards have dropped a bit and it hasn't been at the level that they got too early on." As a coaching team Maton explained that through the season they were expecting highs and lows. "they're a young team. One thing I've learned about young teams is that they are unpredictable. That's not me being disrespectful, that's just what comes with young footballers. Some of them are still learning."

Going into the weekends' fixture Maton feels confident that the team can pull off a result. "When looking at the game before, I wouldn't say we were far the better side, but we matched them like for like on the night and if we play to our strengths and the true ability that the players have got if we turn up on the day I feel we can match any team in this league."

Saturday is set to be a massive day of State League Football at Iluka and we hope you can join us.